What a warfare range will mean

3.  Growlers, the loudest Navy jet, can produce 150 db, enough to cause instantaneous hearing loss. Navy statistics say they produce 113 db at an altitude of 1000 feet, well above the 85 db threshold for permanent hearing loss. Growlers can fly at 1200 feet above ground level in some areas of the Olympic Peninsula. With three Growlers flying together, local noise levels will be worse. “...we need to have a platform that can push in close and inject massive amounts of energy into enemy radar comms and links” said Lt. Col. Don “Buzz” Keen, currently assigned to the Navy's airforce base on Whidbey Island. “ Click here to read about the Navy's electromagnetic warfare strategy.

Alarming effects of a warfare range

1.  A Navy supporting document says, “Friendly Electronic Attack could potentially deny essential services to a local population that, in turn, could result in loss of life and/or political ramifications.”

2.  Each jet burns 1304 gallons per hour and produces 12.5 metric tons of CO2 per hour. This is 23% more than the annual CO2 emissions of a Washington State citizen.

3.  Aircraft aerial maneuvers and their resulting horrific noise on the western half of the Olympic Peninsula will have an overwhelming impact on people living in or visiting the area.

5.  One billion birds fly up and down the Pacific Coast Flyway each year. The effects of loud noise and electromagnetic radiation on their ability to find resting places and to navigate has not been analyzed by the Navy or the Forest Service. 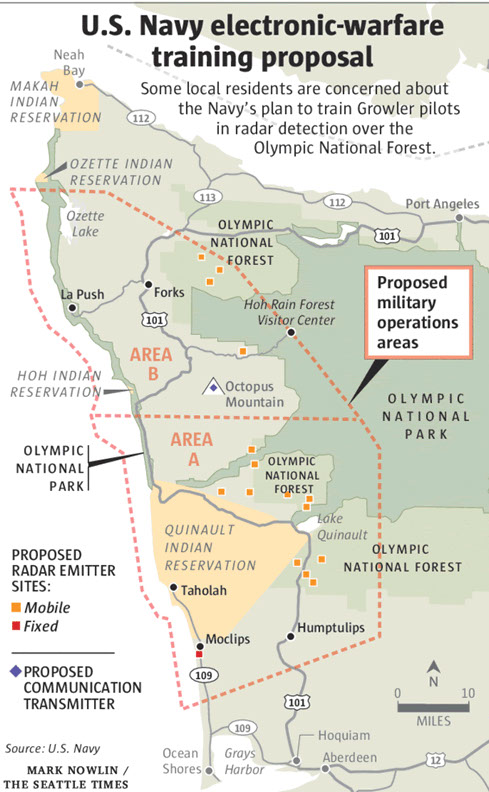 Why you may not have heard about the Navy’s plans

1.  No public notices were published in any media that directly serve the northern and western Olympic Peninsula. In the absence of public comment, the Navy issued a “Finding of No Significant Impact.”

2.  Neither DNR nor Olympic National Park was consulted in the early stages of the Navy’s Environmental Assessment. The Navy has not applied for a permit to use DNR lands.

3.  Destruction of neither the “wilderness soundscape” over Olympic National Park nor property values in areas subject to jet noise are discussed in any official documents.

5.  The Forest Service has admitted publicly that they have done no independent scientific investigation to verify the Navy’s claims.

Click here to view the entire map of the Northwest Training & Testing areas.